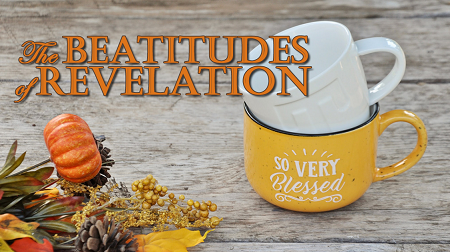 A. Watchfulness and preparation
B. Simile also used by apostles in reference to final judgment (1 Thessalonians 5:2; 2 Peter 3:10)

A. What is “the first resurrection”? (baptism, the resurrection at the second coming, or the resurrection of the cause following the destruction of Jerusalem?)
B. “The second death” is eternal condemnation (Rev. 20:14)
C. “They shall be priests of God” (1 Peter 2:9)

A. Same principle as Revelation 1:3
B. Continual action – keeps and keeps on keeping (James 1:25)

A. The tree of life
B. Obedience is essential (Hebrews 5:9)

How often do you seriously consider eternity? Once this life comes to an end, your eternal existence is established. You will either be rewarded, or punished.

Of the devil, the beast, and the false prophet, John writes, “And they will be tormented day and night forever and ever.” Jesus calls it “outer darkness,” a place of “weeping and gnashing of teeth” (Matthew 8:12; 22:13).

Hell was not designed with people in mind, though. Jesus says it was “prepared for the devil and his angels” (Matthew 25:41). God does not want any of His children to go there, but He is just; those who do not repent will perish (2 Peter 3:9).

While we cannot on this earth truly imagine the severity of hell, two things are certain from Scriptures: (1) it is eternal, and (2) no one truly wants to go there. Those who flippantly say otherwise do not believe or understand the nature of the punishment that awaits.

Prayerfully consider your spiritual condition right now. Are you on your way to eternal life, or the lake of fire and brimstone?

Pray for wisdom as you consider eternity.

The Jehovah’s Witnesses Literal View of 144,000

Review
1. Does belief in the early writing of Revelation necessarily lead one to believe the Max R. King “A.D. 70 Doctrine”?

3. What Scriptures would you point to in refuting the Jehovah’s Witnesses literal interpretation of the 144,000?

4. Expose as many errors of premillennialism as you can, using the Scriptures.

21:1-8 – What is the new heaven and new earth? The spiritual rule of Christ and His church
The New Jerusalem is the church – both now and forevermore
The thrust of this passage is the relationship between God and “he who overcomes.” God says, “I will be his God, and he shall by My son.” There is no greater relationship than this; there is no force that can break this bond in eternity.
Sins that will prevent the impenitent from eternity (Revelation 21:8; 1 Corinthians 6:9-10; Galatians 5:19-21; 1 Peter 4:3)

21:9-21 – Description of the glorified church
Twelve = completeness
Precious stones show “the eternal beauty and value of the church of the living God” (Coffman)

22:6-11 – Return to John’s present time
Judgment upon the harlot (Jerusalem), the end of Palestinian persecution, and then the beast (Rome) would be conquered
Jesus: “Behold, I am coming quickly” – not reference to second coming, but coming in judgment upon Jerusalem in 70 AD
John is told, “Do not seal the words” here; compare to Daniel 8:26 – in one instance the fulfillment would come soon; in the other it would not pass for “many days in the future”

Review
1. In the final judgment, what will be the standard of judgment?

2. What are some of the things that will be no more, according to chapters 21 and 22?

3. What are some of the sins that will lead men to the second death in chapter 21? What will prevent men from entering the gates of the city in chapter 22?

4. Why are the warnings against tampering with the revealed Word so severe?

19:15-16 – “Sharp sword” (cf. Hebrews 4:12; Ephesians 6:17)
Striking of the nations and ruling with rod of iron symbolized the impact of the gospel on the world (prophesied in Psalm 2:1-3)
Ogden: “By His powerful word, He either smites, or shepherds, the nations. His word either convinces, or it convicts.”
“King of kings and Lord of lords” (cf. Revelation 11:15) – spiritual, not literal; accomplished by the spread of gospel

19:17-21 – The judgment against Jerusalem was past, but persecutions continued via the Roman Empire (the beast)
Christ will reign victorious; evil will not and cannot defeat the Lord
Ultimately accomplished by 313 AD with Constantine

20:1-3 – Now that the harlot and the beast have been defeated, John sees the binding of Satan himself
The thousand years is not a literal, specific amount of time; it refers to the complete success of Christ’s cause over persecution
Wallace: “There are twenty figures of speech in the nineteenth and twentieth chapters alone. In a series of symbols such as these, it is not reasonable to make a literal application of the thousand years and a figurative application of all the rest of the symbols, without a contextual or historical reason for doing so. The thousand years, like the other parts of the vision, is a figure of speech—a symbol of something else.”
Coffman: “The ‘little time’…beginning at the point after which God shall have finally achieved the full salvation of the total number of the redeemed, and lasting only a relatively short while. Satan will be ‘loosed’ without any restraint whatever during that brief period.”

20:4-6 – The same martyred souls as those who were “under the altar” in Revelation 6:9
According to the false doctrine of premillennialism, this living and reigning is still future, will occur on the earth, and is inclusive of all Christians
* Note the past tense “lived and reigned”
* “On earth” is nowhere stated nor implied
* “They” refers specifically to those “who had not worshiped the beast or his image, and had not received his mark on their foreheads or on their hands”
Those who have part in the first resurrection are those who overcome (cf. Revelation 2:11)

Review
1. In what four ways is the rider of the white horse identified in chapter 19?

2. What is the sharp sword of Revelation 19:15, and how was it used to strike the nations?

3. What is a possible explanation of the “thousand years” of Revelation 20 that does not contradict other Scriptures?

4. When will the end of the thousand years come?

The Epic of God
by Michael Whitworth