Reactions To The Truth

The seven men chosen to serve the widows in Acts 6 were “men of good reputation, full of the Holy Spirit and wisdom” (Acts 6:3). One of those men was Stephen. Luke says that Stephen was “full of faith and power” and that he “did great wonders and signs among the people” (Acts 6:8). Yet, his teaching got him into trouble with some who did not believe; they “set up false witnesses” (Acts 6:13) and accused Stephen of blasphemy.

The high priest heard the accusation and asked Stephen, “Are these things so?” (Acts 7:1). Rather than defend himself against the charges, Stephen used the time he was given to preach the good news of Jesus. He began by talking about Abraham, Jacob, and Joseph, about Moses and the wilderness wanderings, about Joshua and David and Solomon. He quoted from the prophets Amos and Isaiah.

Stephen then turned his attention to his audience. “You stiff-necked and uncircumcised in heart and ears! You always resist the Holy Spirit; as your fathers did, so do you. Which of the prophets did your fathers not persecute? And they killed those who foretold the coming of the Just One, of whom you now have become the betrayers and murderers, who have received the law by the direction of angels and have not kept it” (Acts 7:51-53).

Their reaction was quite different than the reaction of the people on Pentecost. Instead of recognizing their great need, Stephen’s audience was stubborn and hard-hearted. They “gnashed at him with their teeth” (Acts 7:54), “they cried out with a loud voice, stopped their ears, and ran at him with one accord” (Acts 7:57), and then they stoned the righteous Stephen.

How do you react when you hear the truth, and that truth speaks against you? Do you seek to correct your shortcomings so that you can serve God appropriately, as He has commanded, or do you ignore the man who has told you what God expects? 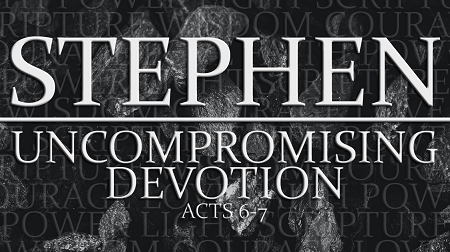 I. Full of faith

Isn’t it amazing how the same message is received in different ways by different people? On Pentecost, Peter told the Jews gathered there that they had crucified the Son of God. Their response was one of repentance and obedience. Here, Stephen delivers the same general message, but the response was much different.

Both audiences were “cut to the heart” (Acts 2:37; 7:54), but instead of inquiring how to fix their condition, Stephen’s audience “gnashed at him with their teeth.” They didn’t want to hear the truth; they didn’t want to accept responsibility.

Stephen was murdered because of his faith and his boldness. He refused to back down; he declined to compromise the message even in the face of death.

How strong is our faith? How easily do we bend to the will of our friends, family, co-workers, and neighbors and reject the truth of the Word? It is not likely we will face the same level of persecution as Stephen and others in the first century when Christianity was illegal, but far too often we compromise when the stakes are much lower.

How can you take a stand for Christ today?

Acts 8:12. But when they believed Philip as he preached the things concerning the kingdom of God and the name of Jesus Christ, both men and women were baptized.

Pray for those over whom you may have a positive influence for Christ, that they may receive the message with an open heart like those on Pentecost.