In Acts 3, we are told of the healing of a man who had been lame since he was born. He was laid at the temple gate every day to ask for money. Peter took notice of the man and said, “Silver and gold I do not have, but what I do have I give you: in the name of Jesus Christ of Nazareth, rise up and walk” (Acts 3:6). Peter took the man by the hand and lifted him up, and he could walk! A miracle had occurred!

As Peter, John, and the man entered the temple, an amazed crowd gathered around them. Peter took advantage of this opportunity to deflect their attention away from himself and direct them instead toward Jesus. “Men of Israel, why do you marvel at this? Or why look so intently at us, as though by our own power or godliness we had made this man walk?” (Acts 3:12).

Peter used the good that was done for the lame man to present the good that could be done for all men. “To you first, God, having raised up His Servant Jesus, sent Him to bless you, in turning away every one of you from your iniquities” (Acts 3:26). Have you used the good situations of your life and the lives of your neighbors to point them to God and the good that is available in Jesus? 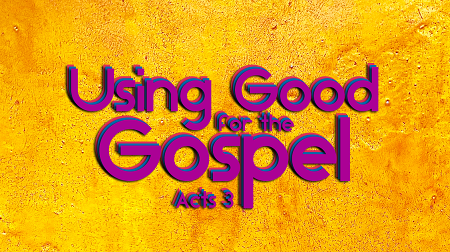 I. God gives more than we ask for

III. Using those opportunities of praise, we should preach the gospel

The birth, life, and death of Jesus were foretold by the prophets of the Old Testament. Hundreds of years before He appeared in the flesh, they said He would appear. They not only prophesied about Him, but also His church. Peter says, “Yes, and all the prophets, from Samuel and those who follow, as many as have spoken, have also foretold these days.”

Here are just a few of the prophecies fulfilled in Christ:

These were not educated guesses; these were Spirit-inspired prophecies about the Savior of the world and His kingdom.

Acts 2:38. Then Peter said to them, “Repent, and let every one of you be baptized in the name of Jesus Christ for the remission of sins, and you shall receive the gift of the Holy Spirit.”

Pray a prayer of thanksgiving for the foreknowledge of God to provide a path to salvation for His creation.