We don’t know what happened. Mark, called John in Acts 13, went with Paul and Barnabas on their first missionary journey initially, but something happened. Perhaps he was homesick, or maybe he was frightened by persecution, or it could be that he was simply overwhelmed by what he witnessed. So, he went home to Jerusalem.

Later, when it was time to go out again, Barnabas suggested giving Mark a second chance. Paul disagreed. “Then the contention became so sharp that they parted from one another” (Acts 15:39). The superstar team of Paul and Barnabas split up.

Does any of this sound familiar? You were gung-ho to do something, but it wasn’t quite what you expected, so you gave up. You quit. But then, after quitting, you regretted it and wanted to try again. Who supported you in your second effort? Who encouraged you and stood by you and stood up for you? Who stood against you?

Do you have strained relationships because of past poor judgment? How can you restore such relationships? It takes effort, and it takes time, and it takes patience. Don’t give up on the person who gave up on you. Maybe, like Paul, they will come to see you in a different light.

When Paul was nearing the end of his life, writing a letter to Timothy from prison, he told the young evangelist, “Get Mark and bring him with you, for he is useful to me for ministry” (2 Timothy 4:11).

The one who had “departed from them in Pamphylia, and had not gone with them to the work” (Acts 15:38) was now “useful to me for ministry.” Perhaps Paul witnessed Mark’s improved performance when he teamed up with Barnabas and went a different direction, or perhaps Paul simply had a moment of weakness himself in Acts 15. Whatever the case, his opinion of Mark changed over time, and he was willing to work with him again.

If you are willing to repent of your past sins and commit to serving God, you can be useful as well. It does not matter what you did yesterday. What matters is what you do today.

Jesus Is The Answer

The man who was formerly one of the most feared persecutors of the disciples of Jesus became one of the most fearless proclaimers of the truth concerning the Son of God. In Antioch of Pisidia, during his first missionary journey with Barnabas, Paul appealed to the historical background of the Messiah as well as the proof of fulfilled prophecy in Jesus’ life.

Paul concluded his message by identifying Jesus as the answer to man’s biggest problem: sin. Because of sin, man’s relationship with God is severed (Isaiah 59:1-2). Because of Jesus, man can be reconciled to God! “Therefore let it be known to you, brethren, that through this Man is preached to you the forgiveness of sins; and by Him everyone who believes is justified from all things from which you could not be made justified by the law of Moses” (Acts 13:38-39). Man can be forgiven and justified in the sight of the Almighty!

What was the response to this message? The Gentiles received the message and desired to know more. “So when the Jews went out of the synagogue, the Gentiles begged that these words might be preached to them the next Sabbath” (Acts 13:42). There were also “many of the Jews and devout proselytes” who “followed Paul and Barnabas” and “persuaded them to continue in the grace of God” (Acts 13:43).

However, there were other Jews who “were filled with envy; and contradicting and blaspheming, they opposed the things spoken by Paul” (Acts 13:45).

The same is true today. Some will receive the word like the Gentiles who “were glad and glorified the word of the Lord” (Acts 13:48), while others will “reject it, and judge yourselves unworthy of everlasting life” (Acts 13:46). Each individual must make the choice: receive or reject the gospel of God; turn to Jesus as the answer or turn away from Him and continue in rebellion. What is your choice? 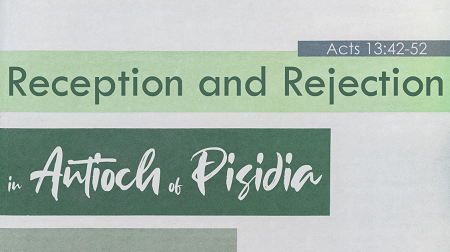 II. Paul and Barnabas refused to back down

III. The missionaries driven out of Antioch 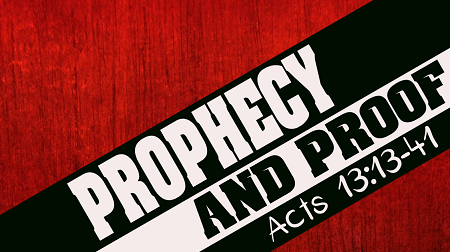 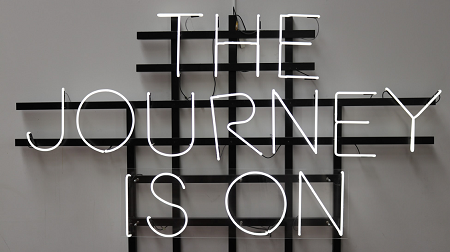 II. The mission was met with interest and opposition (Acts 13:6-8)

A. Sergius Paulus believed (Acts 13:12)
B. Belief is always preceded by hearing (Romans 10:17)
C. Belief is a “synecdoche” for the proper response – obedience

Do these thoughts ever cross your mind? The Jews were God’s chosen people to bring the Messiah into the world, but when Paul and Barnabas began teaching multitudes of Gentiles, “they were filled with envy.” They disputed the truth that the messengers of God spoke.

Paul’s response gives us an idea of the entitlement they may have been proclaiming. He said, “It was necessary that the word of God should be spoken to you first; but since you reject it, and judge yourselves unworthy of everlasting life, behold, we turn to the Gentiles.”

No one deserves everlasting life, but by the grace of God it is available. If you accept His grace for your sins, it is only right that others should have access as well, no matter how terrible we believe they have sinned.

Acts 16:33. And he took them the same hour of the night and washed their stripes. And immediately he and all his family were baptized.

Pray for patience with others who are seeking God’s truth, and pray for opportunities to be gracious and helpful toward them.

When Barnabas and Saul embarked on their first missionary journey, John Mark traveled with them as their assistant (Acts 13:5), but he did not stay with the mission long (Acts 13:13). We are not told the precise reason for Mark’s departure, but he violated Paul’s trust when he left.

In fact, Paul’s distrust was so great that he refused to give Mark another chance on his second missionary trip, despite Barnabas’ suggestion. “Then the contention became so sharp that they parted from one another” (Acts 15:39).

Paul was focused on the work and strengthening the churches that were established during the first trip, and did not want to be distracted by Mark’s shortcomings; Paul did not want to risk a second abandonment. Barnabas, on the other hand, wanted to encourage Mark in his labors for the Lord and provide him the emotional support he needed in his service.

How many people disappear from the Lord’s service today? What should we do when we see someone drifting away from the faith? Paul himself wrote that we should “restore such a one in a spirit of gentleness, considering yourself lest you also be tempted” (Galatians 6:1).

When we mess up, we may disappoint family and friends, but that does not mean we are forever useless. It may take time to rebuild trust, but if we are diligent and faithful, it can be accomplished, just as Mark eventually won back Paul’s trust (2 Timothy 4:11).

It starts small. We should not expect someone to entrust us with a major task if we have not proved ourselves with simpler things. Read Jesus’ parable of the talents in Matthew 25:14-30. What does Jesus say to those who were faithful and fruitful? What does He say to the man who did nothing with that which was entrusted to him?

It is very important that we serve the Lord to the best of our ability and not give up. But if we do stumble, know that we can turn ourselves around and become useful to Him again.