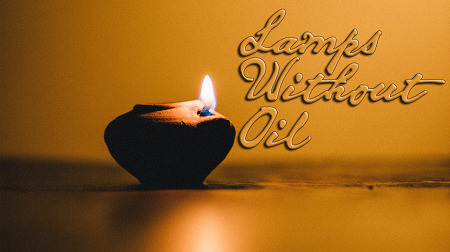 A. Ancient east wedding custom
B. The foolish tried to get by with minimum effort and ran out of oil

The principle of stewardship is found throughout God’s Word, but perhaps the point is best made by our Lord in the parable of the talents.

God has entrusted to us something of great value. What we do with it will directly impact our ultimate reward from Him. The men who received five and two talents when out and doubled their master’s wealth. The one who received one, however, hid it out of laziness and used fear as an excuse.

The master’s estimation of this man is telling. He calls him “wicked and lazy.” The servant had done nothing that was morally reprehensible by the standards we would usually use to measure wickedness, but because of his slothfulness he was called “wicked.”

The other two servants, however, were commended for their efforts. They were called “good and faithful” and each was made a “ruler over many things.” They were invited to “enter into the joy of your lord.” The Lord blesses those who are diligent in doing His will.

Memory (Recite to a friend without looking)

Pray for stronger faith to trust and obey the Lord and to be active about the work in His kingdom.