There were some Pharisees who were sincere in their belief of God and were willing to listen to the teaching of Jesus. The majority, however, seemed to be self-absorbed and self-righteous, relying on their own goodness for acceptance. One such example is Simon.

Simon invited Jesus to eat with him, but he did not perform any of the customary greetings that were expected of a host. There was a sinful woman there who took care of those things, though, much to Simon’s chagrin. Luke tells us that she “stood at His feet behind Him weeping; and she began to wash His feet with her tears, and wiped them with the hair of her head; and she kissed His feet and anointed them with the fragrant oil” (Luke 7:38). Simon was disgusted at her action and immediately doubted Jesus’ claim to be from God, thinking to himself, “This Man, if He were a prophet, would know who and what manner of woman this is who is touching Him, for she is a sinner” (Luke 7:39).

Jesus recognized an opportunity to teach Simon an important truth here, that the person who recognizes their deep debt will be more grateful for forgiveness than the man who does not think he owes very much. The Lord made it clear that He was talking about Simon and the woman. “Do you see this woman? I entered your house; you gave Me no water for My feet, but she has washed My feet with her tears and wiped them with the hair of her head. You gave Me no kiss, but this woman has not ceased to kiss My feet since the time I came in. You did not anoint My head with oil, but this woman has anointed My feet with fragrant oil. Therefore I say to you, her sins, which are many, are forgiven, for she loved much. But to whom little is forgiven, the same loves little” (Luke 7:44-47).

Do you appreciate what Jesus has done for you, as the woman appreciated Him? Or do you view yourself more like Simon, a person who hasn’t done anything truly evil, therefore a person who doesn’t need to change very much? The Scriptures make it clear that none of us are guiltless; “for all have sinned and fall short of the glory of God” (Romans 3:23). Without the loving forgiveness of the Savior, we all stand condemned before God.

A centurion was a position in the Roman military. He explained his authority to Jesus, “For I also am a man placed under authority, having soldiers under me. And I say to one, ‘Go,’ and he goes; and to another, ‘Come,’ and he comes; and to my servant, ‘Do this,’ and he does it” (Luke 7:8).

This particular centurion showed respect to the Jewish nation and heritage, and in return, the Jews respected him. The elders of the Jews implored Jesus to heal this man’s servant, saying he was “deserving, ‘for he loves our nation, and has built us a synagogue’” (Luke 7:4-5).

Jesus agreed to heal the servant, but the centurion objected to a personal visit. “Lord, do not trouble Yourself, for I am not worthy that You should enter under my roof. Therefore I did not even think myself worthy to come to You. But say the word, and my servant will be healed” (Luke 7:6-7). This man demonstrated great humility despite his position of authority. How much we can learn from him in this twenty-first century, so filled with people consumed with entitlement!

Jesus “marveled” at the faith of this man. In another incident, after the people of Nazareth rejected Him, it is said that Jesus “marveled because of their unbelief” (Mark 6:6). If our Lord marveled at us, would it be for our faith or for our unbelief? Do we doubt His power like those of Nazareth, or do we recognize not only His power but our unworthiness to receive such a blessing like the centurion?

Jesus declared, “Assuredly, I say to you, I have not found such great faith, not even in Israel! And I say to you that many will come from east and west, and sit down with Abraham, Isaac, and Jacob in the kingdom of heaven. But the sons of the kingdom will be cast out into outer darkness. There will be weeping and gnashing of teeth” (Matthew 8:10-12). The Jews, who should have enjoyed these blessings as God’s people, would be cast out because they did not accept Jesus; the Gentiles, however, would embrace the opportunity of God’s grace to be saved and would join the saints of old in glory.

Are you on your way to fellowshipping with Abraham in eternity? 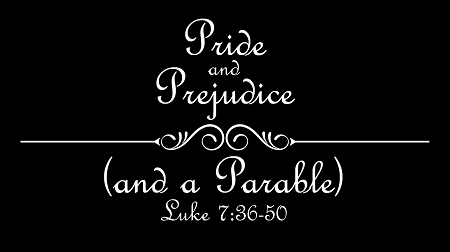 I. Simon the Pharisee vs. the sinful woman

III. When God forgives, He forgives completely and eternally

Jesus attracted a wide variety of acquaintances. There were some who wanted to learn from Him, understanding His power to transform their lives. Others were looking for reasons to reject Him and mock Him. We see both at Simon the Pharisee’s house.

A woman attended the feast, a known sinner, and she boldly anointed the Savior’s feet with extravagant oil. Simon self-righteously criticized Jesus for allowing the woman to even be in His presence, not realizing his own great need for forgiveness.

Do we see ourselves as Simon, or as the sinner? We must recognize our great need for God’s forgiveness. It matters not who we are, “for all have sinned and fall short of the glory of God” (Romans 3:23).

Do we have the faith of the sinful woman to humbly submit to the Savior? To show our love through obedience and daily service to Him?

Pray for the humility to see your shortcomings and for opportunities to overcome them through faithful action.