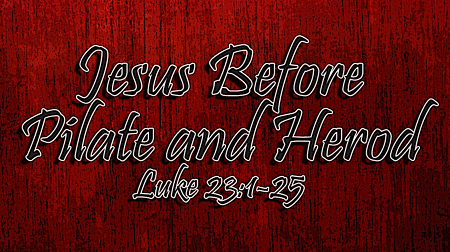 Life is full of difficult decisions. If given the choice between love and hatred, we would obviously choose love, right? The Jews in our reading today, however, did the exact opposite.

The love of Jesus was on display every single day while He walked this earth, but He was rejected. He taught truth, showed mercy, granted grace, but was ultimately rejected. He was brought before Pilate, accused of misleading the people. Even though there was “no fault” found in Him, the crowd demanded His death by crucifixion.

Instead of the love of Jesus, the people chose the hatred of Barabbas. This man “had been thrown into prison for a certain rebellion made in the city, and for murder.” There is no record of remorse on his part, but when given the choice between the Savior and a murderer, the murderer was set free and the Son of God was killed.

Pray for the courage to choose Christ without compromise in the face of opposition in this hate-filled world.

It’s There in Black and White
by Glenn Colley, Ben Giselbach, Hiram Kemp, and Melvin Otey

A Time For Defense
by Wendell Winkler