Leprosy was a dreaded disease. Many regulations regarding leprosy are found in the Law of Moses, particularly in Leviticus 13-14. These lepers in Luke 17 “stood afar off” (Luke 17:12); they were required to make their malady known and separate themselves from others. In the Law, it is written, “Now the leper on whom the sore is, his clothes shall be torn and his head bare; and he shall cover his mustache, and cry, ‘Unclean! Unclean!’” (Leviticus 13:45). It was an undesirable life.

These ten lepers, when they saw Jesus, cried out to Him, “Jesus, Master, have mercy on us!” (Luke 17:13). They had no doubt heard of His wonders, and they desired His compassion and healing. He answered them, “Go, show yourselves to the priests” (Luke 17:14). This was necessary according to the Law for a leper to be declared clean by the priest (Leviticus 14:1ff).

The Scriptures reveal that the lepers were cleansed on their way to the priests. Only one of them, however, when he realized he had been healed, returned to Jesus. Upon returning, he “glorified God, and fell down on his face at His feet, giving Him thanks” (Luke 17:15-16). Only one out of ten.

The Scriptures further reveal that this man was a Samaritan (Luke 17:16), implying the others were Jews. The Jews, who had been raised to know that the Messiah was coming and should have recognized Him when He arrived, largely refused to believe in the Son of God. But those who were previously without hope, outside the promises given to Israel, were the ones who showed gratitude and worshiped.

Jesus told this Samaritan man, formerly afflicted by leprosy, “Arise, go your way. Your faith has made you well” (Luke 17:19). The other nine may have imagined they were getting better on their own, or discredited Jesus’ power by claiming He didn’t really do anything. But this one man saw the power of the Son of God, acknowledged it, and acted upon it.

May our faith and thanksgiving be as strong as this leper’s. 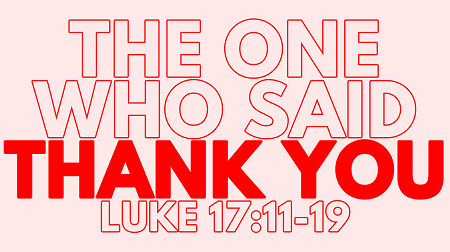 I. The lepers’ request

The apostles said to Jesus, “Increase our faith.” What a noble and honorable request! In humility, they admitted their need for a stronger faith.

Where does faith come from? Romans 10:17 says, “So then faith comes by hearing, and hearing by the word of God.” Elsewhere, we are told that faith is needed to please God (Hebrews 11:6). Thus, if we neglect His Word, in effect abandoning our faith, we cannot please Him.

We are so blessed in this day and age to have immediate access to the Bible. I have several different translations on my bookshelf, but I can also access it digitally with a cell phone app.

In addition to the ability to freely read the Word, we also have the blessing of sound materials and lessons—again, both in book form and online! With a few clicks of a mouse or taps on my cell phone screen, I can access a large number of sermons to listen to while I drive in the car or take a walk.

Never before have we had such a grand opportunity to “increase our faith” as we do in the twenty-first century. Don’t squander these great blessings!

Pray for God to increase your faith as you study His inspired Word.