We are not told of great deeds done by the beggar Lazarus. The works that showed his faith are not recorded for us in Holy Writ. All we know of his life is what Jesus said: he was a “beggar named Lazarus, full of sores, who was laid at (the rich man’s) gate” (Luke 16:20).

Of the rich man, we know very little. We do not even know his name! We are told that he “was clothed in purple and fine linen and fared sumptuously every day” (Luke 16:19). We also know that he neglected the needs of his fellow man who desired just the crumbs from the table.

We do know that Lazarus had faith, however, as evidenced by the angels carrying him to Abraham’s bosom. We also know that the rich man did not act on any spiritual knowledge he may have had, for when he died he found himself “in torments in Hades” (Luke 16:23).

The rich man begged for relief from his pain, but Abraham reminded him how he lived his life. The rich man then turned his attention to the living: his five brothers. He begged Abraham that Lazarus might go warn them so they could avoid the same punishment he experienced. Abraham denied the request, saying, “They have Moses and the prophets; let them hear them” (Luke 16:30).

There are some in this life who reject baptism because they know a loved one who has now passed was never immersed. They are concerned that if they obey the gospel, they will condemn their loved one. Friends, nothing you can do can affect a person’s eternal destiny once they have passed from this life. You will be judged by your actions; they will be judged by their own.

If your loved ones could send a message to you after their passing, it would be this: “You have Jesus and the inspired writings of the New Testament; hear them!” You must develop a faith in the One who died for you. Do not allow someone else’s rebellion to determine your response. Obey the gospel. Repent of your sins. Be immersed and have those sins washed away! 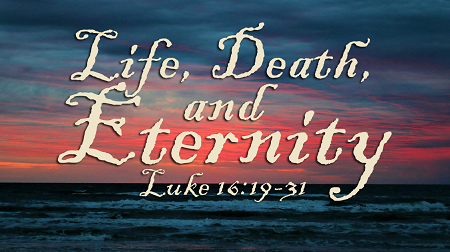 “What’s in a name?” There is value in a name. We are identified by our name, and we want people to think good things when they hear our name.

What was the name of the rich man in Luke 16? That information is lost to history. He was important in this world while he lived, as he “was clothed in purple and fine linen and fared sumptuously every day.” But in death, Jesus did not deem it important to tell us the rich man’s name.

What about the beggar? Jesus wasn’t shy about naming him. Lazarus desired to eat the rich man’s scraps, whatever was left over after the rich man was full. He received evil things while living, but upon his death, Lazarus “was carried by the angels to Abraham’s bosom.”

The rich man will be tormented forever, but Lazarus will be comforted. The rich man’s name no longer matters, but Lazarus stands as a testimony of what awaits the faithful who endure the hardships of humanity.

Do not place your hope in the riches of life. One day those things will be no more, but your soul lasts forever. One day you will be either tormented or comforted. What you do now affects where you spend eternity.