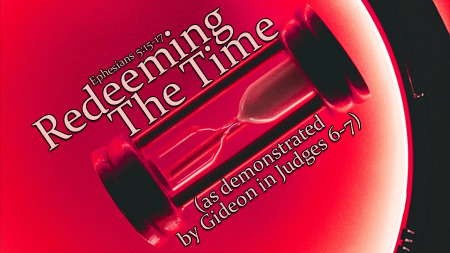 A. To “redeem” is to buy back again
B. Past darkness vs. present light (Ephesians 5:8)
C. Past mistakes should serve as motivation to make the most of present opportunities

II. The example of Gideon

How Many Signs Do You Need?

God had already consumed the meat and unleavened bread that Gideon set on the rock before departing (Judges 6:19-22), and had providentially protected him through the defense of his father from the anger of the men of the city after the destruction of the altar of Baal and the wooden image beside it (Judges 6:28-32). What more did Gideon need?

Gideon brought together the Abiezrites and called men from Manasseh, Asher, Zebulun, and Naphtali to join him in the fight against the Midianites and Amalekites. Yet, he still requested another sign from God. He laid a fleece of wool out on the threshing floor, and asked God to make it wet with dew overnight but keep the ground all around it dry. God did what Gideon asked.

It still wasn’t enough. Gideon repeated the request but reversed the specifications. Keep the fleece dry but let the ground all around it be wet. And again, God did what Gideon asked. This time, though, Gideon was satisfied with what God accomplished. There is no inspired record of any lingering doubt in Gideon’s mind.

Do we ask for too many signs today? What happened when the people of the first century asked Jesus for signs? He had performed many miracles, but they still wanted to see more. “Teacher, we want to see a sign from You,” said a group of scribes and Pharisees (Matthew 12:38). Jesus responded, “An evil and adulterous generation seeks after a sign, and no sign will be given to it except the sign of the prophet Jonah” (Matthew 12:39).

Friends, stop looking for signs. God has given us all the proof that we need in the inspired Scriptures. Turn to His Word, learn His will, and obey His commands.

We read yesterday that God told Gideon to tear down his father’s altar to a false idol and erect an altar for Him instead, and Gideon obeyed at night “because he feared his father’s household and the men of the city too much” (Judges 6:27). Of course, when the morning light crept over the horizon, his deed was discovered and the men were angry. They said to Joash, Gideon’s father, “Bring out your son, that he may die, because he has torn down the altar of Baal, and because he has cut down the wooden image that was beside it” (Judges 6:30).

Does Joash’s reaction to the men surprise you? Rather than agree with the men of the city and defend his false religion, he challenges them. We know that Joash’s faith before this day was not perfect, as he had allowed himself to be swept up in the religion of Baal. But Gideon’s actions seem to have affected him.

He tells the men, “Would you plead for Baal? World you save him? Let the one who would plead for him be put to death by morning! If he is a god, let him plead for himself, because his altar has been torn down!” Joash finally recognizes the folly of giving allegiance to this false god, an idol that could not possibly defend itself.

Throughout the ages, God has consistently provided evidence of His existence and His power. Consider the strength displayed in the deliverance of the Israelites from Egyptian bondage, or the mastery He showed on Mount Carmel when Elijah challenged Baal’s prophets. Think of all the miracles performed during the first century, during Jesus’ personal ministry and the continued evangelization of the world by the apostles.

Even when one discounts the supernatural, ample evidence is present to show His existence. “For since the creation of the world His invisible attributes are clearly seen, being understood by the things that are made, even His eternal power and Godhead, so that they are without excuse” (Romans 1:20).

Are You a Secret Disciple?

Gideon is among those names of the faithful listed in the Hebrews letter upon which the writer does not expound. However, the book of Judges gives us some insight into the faith of this man. He was called to lead the people of God and “save Israel from the hand of the Midianites” (Judges 6:16). Like many others who are called to greatness, Gideon resists at first, claiming, “Indeed my clan is the weakest in Manasseh, and I am the least in my father’s house” (Judges 6:15). And yet, the Lord promises victory to Gideon. He says, “Surely I will be with you, and you shall defeat the Midianites as one man” (Judges 6:16).

Gideon, still not convinced, asks for a sign. He prepares an offering for the Angel of the Lord, and God causes fire to rise out of the rock and consume the meat and bread which were placed upon it.

Later that night, God commanded Gideon to tear down the altar of Baal which was constructed by his father, and to use that wood to build a new altar to the Lord. Gideon obeyed, but the inspired writer gives us a peek into the imperfect faith of this judge. “So Gideon took ten men from among his servants and did as the Lord had said to him. But because he feared his father’s household and the men of the city too much to do it by day, he did it by night” (Judges 6:27).

When invited to participate in some activity on Sunday morning that conflicts with the time of worship services, do you tell the truth as to why you can’t participate? Or do you pacify them with an excuse, such as, “That’s too early in the morning?” Or do you decide to go with your friends rather than worship?

Gideon did what was right, but did it under a cloak of darkness. In so doing, he could not influence anyone towards the truth. We cannot be secretive disciples. We must be followers of Jesus all the time, no matter who is watching!