The Value Of Questions

Questions asked at the right time can be a wonderful teaching tool. When Philip met the Ethiopian eunuch, the eunuch was reading from Isaiah’s prophecy. Philip asked, “Do you understand what you are reading?” (Acts 8:30). This is a splendid question for a teacher to ask a student.

The eunuch responded with a question of his own: “How can I, unless someone guides me?” (Acts 8:31). This man was humble, seeing his need for a wise teacher. “He asked Philip to come up and sit with him” (Acts 8:32). He was hospitable to a man who was willing to study with him.

As they read from the scroll, the eunuch asked Philip another question. He said, “I ask you, of whom does the prophet say this, of himself or of some other man?” (Acts 8:34). Philip seized the opportunity to explain how Jesus Christ fulfilled the prophecies recorded so many centuries before.

We can also infer from the eunuch’s next question that Philip taught him about baptism. “See, here is water. What hinders me from being baptized?” (Acts 8:36). Had Philip not expressed the importance of immersion, the eunuch never would have asked such a question. But Philip’s answer reinforced baptism’s place in the gospel plan of salvation. He declared, “If you believe with all your heart, you may” (Acts 8:37).

Without delay, the chariot was stopped, and Philip and the eunuch went down into the water. The eunuch died to his sins, was buried with Christ in baptism, and was raised again to walk in newness of life (Romans 6:3-4). He was immersed for the remission of sins (Acts 2:38). His sins were washed away (Acts 22:16). He believed and he was baptized, thus, he was saved (Mark 16:16).

Have you followed the example of the eunuch? Have you confessed your belief and been immersed into Christ? If not, why are you delaying?

Of all the Samaritans that accepted the gospel, Simon may have been the most surprising. He was a very popular entertainer as a sorcerer, “claiming to be someone great” (Acts 8:9). And he was not the only one making that claim; the people—“from the least to the greatest”—also said, “This man is the great power of God” (Acts 8:10). The people of the city “heeded him because he had astonished them with his sorceries for a long time” (Acts 8:11).

Things changed for Simon when Philip arrived in Samaria. Philip was not a master of the sleight of hand; the miracles he performed in the name of Jesus were legitimate. The truth he preached was powerful. The people believed him and obeyed the gospel. Even Simon heeded Philip. “Then Simon himself also believed; and when he was baptized he continued with Philip, and was amazed, seeing the miracles and signs which were done” (Acts 8:13).

Peter and John came to Samaria to see the good work that Philip had done. They laid hands on their new brothers and sisters, imparting upon them the ability to work miracles as well. That gave Simon an idea. “And when Simon saw that through the laying on of the apostles’ hand the Holy Spirit was given, he offered them money, saying, ‘Give me this power also, that anyone on whom I lay hands may receive the Holy Spirit’” (Acts 8:18-19).

Simon sinned, thinking that God’s power was for sale. He sinned, missing the acclaim he once enjoyed. He thought he could reclaim some of his former popularity. Peter rebuked him and said, “Repent therefore of this your wickedness, and pray God if perhaps the thought of your heart may be forgiven you. For I see that you are poisoned by bitterness and bound by iniquity” (Acts 8:22-23).

Our God is a merciful and gracious God, and He wants us to obey Him and serve Him from the heart. Even when we sin, He gives us the opportunity to repent and return to Him.

Philip, another one of the seven servants Luke introduced in Acts 6, was among the Christians scattered during the great persecution following Stephen’s martyrdom. Philip went to Samaria, and despite the typical Jewish opinion of Samaritans at that time, he “preached Christ to them” (Acts 8:5).

Hearing the truth and seeing the supporting signs, “multitudes with one accord heeded the things spoken by Philip” (Acts 8:6). What were those things? Luke does not leave us wondering. He taught them and “preached the things concerning the kingdom of God and the name of Jesus Christ” (Acts 8:12). He told them about the Savior of the world and the church that He established. And at this preaching, “both men and women were baptized” (Acts 8:12).

There are many things involved in preaching “the things concerning the kingdom of God and the name of Jesus Christ.” One must preach the divine nature of Jesus. He is not a created being but eternal. He is God the Son, as much Deity as God the Father and God the Spirit.

One must preach the prophecies that point to Jesus the Messiah. His advent was prophesied, as was His suffering and His power. One must preach about the church, as it is the kingdom (Matthew 16:17-19). It is to the church that one is added when he obeys the gospel (Acts 2:47).

One must preach the truth of Jesus’ return. He is coming again, but not to set up His kingdom. He already did that. Nor is He coming to rule on this earth for one thousand years. He affirmed before Pilate that His kingdom was not of this world (John 18:36). No, He is coming again to deliver the kingdom to the Father (1 Corinthians 15:24).

Have you ever heard these things? Has the truth of the gospel been preached to you, or have you only heard fanciful theories based on nothing but speculation? Be like the Bereans who “searched the Scriptures daily to find out whether these things were so” (Acts 17:11). 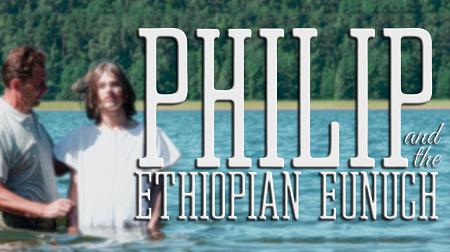 A. God provided the right teacher (Philip) for the student (the eunuch)
B. Philip and the eunuch ended up in the same place at the same time
C. The eunuch was reading from Isaiah 53

A. “Do you understand what you are reading?”
B. “How can I, unless someone guides me?”
C. “I ask you, of whom does the prophet say this, of himself or of some other man?” 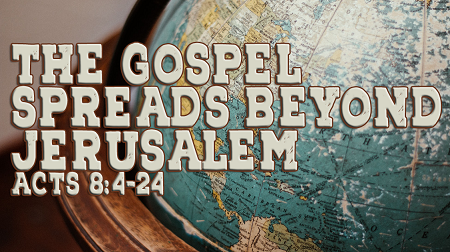 I. The responsibility of every Christian to evangelize

II. The gospel is for all mankind

III. The possibility of apostasy…and restoration!

What does it mean to preach Jesus? When Philip went to the city of Samaria, “he preached the things concerning the kingdom of God and the name of Jesus Christ.” The result was an obedient faith. The Scriptures tell us “they believed” and “both men and women were baptized.”

Later, Philip was sent to the Ethiopian eunuch as he traveled from Jerusalem to Gaza. The man was reading from Isaiah’s prophecy, but had trouble understanding its import. “Then Philip opened his mouth, and beginning at this Scripture, preached Jesus to him.” The result was again belief and baptism.

Many in the religious world attempt to circumvent the grace of God, seeking loopholes to avoid obedience. Some want the benefits of Christianity without submitting to the commands of Christ.

This chapter shows that obedience based upon faith is a part of believing the message of Jesus. “Preaching Jesus” is not just telling stories about the Lord, but includes instructions on how to follow Him and how to access the blessings available to His followers. May we always strive to teach and preach the whole counsel of God.

Acts 8:12. But when they believed Philip as he preached the things concerning the kingdom of God and the name of Jesus Christ, both men and women were baptized.

Pray for wisdom in teaching others about the Savior. Pray for strength to resist compromising His truth.