Happiness Does Not Come From Stuff

One of the most impressive men we read about in the book of Acts who was not an apostle was a man named Barnabas. Actually, that wasn’t his name. His name was Joses, but the apostles called him Barnabas. Luke explains that the name Barnabas “is translated Son of Encouragement” (Acts 4:36). When we are first introduced to Barnabas, his grand generosity is demonstrated. Luke says that Barnabas was “a Levite of the country of Cyprus, having land, sold it, and brought the money and laid it at the apostles’ feet” (Acts 4:36-37). The man’s primary concern was to care for those in need.

This was the attitude of many in the early church, as Luke explains that they “were of one heart and one soul; neither did anyone say that any of the things he possessed was his own, but they had all things in common” (Acts 4:32). He further wrote that “all who were possessors of lands or houses sold them, and brought the proceeds of the things that were sold, and laid them at the apostles’ feet; and they distributed to each as anyone had need” (Acts 4:35).

How different were these followers of Jesus than the typical worldly person! So many people are focused on obtaining more things, not giving them away. But how many of those people can claim true happiness because of their material possessions?

Jesus encountered a man who was obsessed with his stuff. The young man wanted to be assured of eternal life, and he asked Jesus which commands he needed to keep. The Lord rattled off a number of God’s laws, and the man said, “All these things I have kept from my youth. What do I lack?” (Matthew 19:20).

Jesus answered, “If you want to be perfect, go, sell what you have and give to the poor, and you will have treasure in heaven; and come, follow Me” (Matthew 19:21). The result was sorrow in the man’s heart, not because he had to part with his things, but because he refused to!

Be Bold For Jesus

The religious leaders were not happy with Peter and John and their activities in the temple. The two apostles were taken into custody and brought before the Sanhedrin. Undaunted by the opposition, Peter boldly declared again the gospel: Jesus was crucified, He was raised from the dead, and He is the only One who can save anyone. “Nor is there salvation in any other, for there is no other name under heaven given among men by which we must be saved” (Acts 4:12).

The rulers threatened the apostles and “commanded them not to speak at all nor teach in the name of Jesus” (Acts 4:18). Peter and John refused to back down. They refused to be intimidated. They refused to be silenced. “Whether it is right in the sight of God to listen to you more than to God, you judge. For we cannot but speak the things which we have seen and heard” (Acts 4:19-20).

Are you bold in the gospel, or do you hide your faith? Are you afraid of upsetting friends? Of strained relationships within the family? Or do you take advantage of the opportunities to spread the gospel when they are presented to you?

It is important to be prepared for those opportunities and to pray for them. Peter later wrote a letter to Christians and encouraged them, “But sanctify the Lord God in your hearts, and always be ready to give a defense to everyone who asks you a reason for the hope that is in you, with meekness and fear” (1 Peter 3:15). Are you ready to be bold for Jesus? 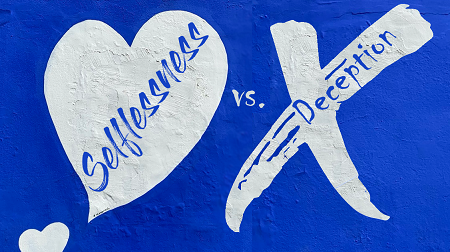 A. Their sin was deception: “You have not lied to men but to God” (Acts 5:4)
B. Attributes of God on display in this account

C. Punishment similar to Nadab and Abihu (Leviticus 10:1-2) – “Both make the point: God’s Word and His spokesmen must be taken seriously” (Copeland) 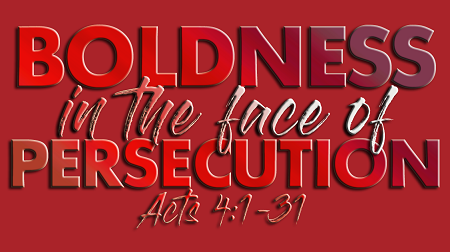 I. Reactions to preaching

II. Opposition to the early church

III. The reaction of the early church to persecution

“Now when they saw the boldness of Peter and John, and perceived that they were uneducated and untrained men, they marveled. And they realized that they had been with Jesus.”

What a testimony to the impact Jesus had on the lives of these men! What kind of an impact has the Christ had on your life?

When you talk to others about the Lord, are you confident in your belief? Can others see Jesus in your life, the way you talk and act? Do you exhibit the meekness and mercy of the Messiah? Do you love your neighbor enough to tell him about the only path to salvation?

Peter and John were so convinced that they would not let the threats of violence derail them from the mission. “Whether it is right in the sight of God to listen to you more than to God, you judge. For we cannot but speak the things which we have seen and heard.”

Is your faith so strong that you have to tell others?

Pray for boldness as you talk to others about God regardless of consequences.