The Gospel Is For All

Under the Old Law, the Jews were God’s people. If you were a Gentile, few Jewish people would have anything to do with you. There was a process of proselytization, but that was not typical for Jews to actively promote such among Gentiles.

The prophets of old, however, told of a day when “the mountain of the LORD’s house shall be established on the top of the mountains, and shall be exalted above the hills; and all nations shall flow to it” (Isaiah 2:2). Jesus told His apostles that they were to be His witnesses “in Jerusalem, and in all Judea and Samaria, and to the end of the earth” (Acts 1:8). Even Peter himself, when he preached that first gospel sermon on the Day of Pentecost, said that God’s promise was for the Jews (“to you and to your children”) and the Gentiles (“to all who are afar off”) (Acts 2:39).

It seems that the early church didn’t really understand these things, or perhaps they simply weren’t paying close attention. When the church was established, it took a while for them to get out of Jerusalem. In fact, it took “a great persecution” to get them out of Jerusalem. “At that time a great persecution arose against the church which was at Jerusalem; and they were all scattered throughout the regions of Judea and Samaria, except the apostles” (Acts 8:1). You may recall that Philip was the one who took the gospel to the Samaritans.

Fast-forward a bit to Acts 10, where we are introduced to the Gentile Cornelius, described as “a devout man and one who feared God with all his household, who gave alms generously to the people, and prayed to God always” (Acts 10:2). Cornelius was not a Christian, nor was he a Jew. But he had the heart of one who would accept the truth when he heard it.

Peter was sent to preach to Cornelius, and the apostle admitted, “In truth I perceive that God shows no partiality. But in every nation whoever fears Him and works righteousness is accepted by Him” (Acts 10:34-35). Cornelius and his household were immersed, and the Jews recognized that “God has also granted to the Gentiles repentance to life” (Acts 11:18). 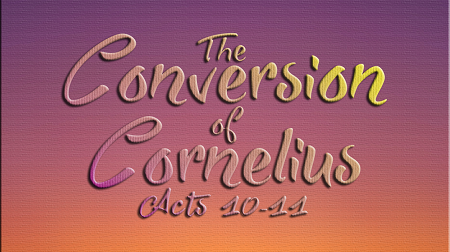 I. Cornelius was a good man

II. Cornelius was a lost man

God is no respecter of persons, and God’s children should follow His lead. Racism and classism are sinful attitudes and must be rejected by God’s people.

Children often sing about Jesus’ love for all:

May we all develop the same innocence and love and show no partiality in our dealings with God’s creation.

Pray for understanding toward those who are different than you. Pray for tolerance without compromising the truth.